European visitors to Burma in the nineteenth century frequently remarked on what they perceived to be the startling freedom and equality enjoyed by Burmese women, and currently the “unofficial slogan” of the Union of Myanmar’s government-approved women’s organization states that “Myanmar women have enjoyed equal rights with Myanmar men since time immemorial” (p. 1). But while it is true that historically Burmese women have had access to economic power and have been able to exercise influence in the domestic sphere, they have also been considered spiritually inferior, and thus unfit for positions of leadership. Largely excluded from direct political power, with a few prominent (and often demonized) exceptions, women in Burma could usually exercise political power only through indirect influence. The upheavals of the colonial and post-colonial eras have not resulted in any measurable increase in the status of Burmese women.

Jessica Harriden’s monograph The Authority of Influence: Women and Power in Burmese ­History analyzes women’s access to power in Burma, and how this access has changed from the classical era to the present day. In doing so, Harriden enriches the existing understanding of gender and power relations in Burma. The book is divided into nine chapters, ordered chronologically, with the first chapter outlining the cultural context of gender relations in Burma. In this first chapter Harriden unpicks the meaning of power in the Burmese context, distinguishing between the Burmese conceptions of awza, an indirect influence, and ana, or direct political authority. Burmese women rarely possessed ana, although they could exercise awza. Expectations regarding power were shaped by religious influences, and also included the notion of hpoun, a spiritual power possessed only by men. Women’s innate spiritual inferiority meant that while women could command influence in the domestic context, there was deep ambivalence about women exercising direct political power, as exemplified by Burmese attitudes towards those exceptional Burmese women who wielded political authority, discussed in the third chapter.

Chapter two discusses depictions of female power in classical and pre-modern Burma. Given the scope of the subject, Harriden is necessarily selective in the material that she chooses to include here. This chapter combines a much broader chronological scope with a relatively narrow focus on the religious and familial influence of selected elite Burmese women, resulting in an analysis that seems a bit speculative and incomplete in comparison to the following chapters. While many of the early sources concerning women in Burma are prescriptive, incomplete, and possibly fictional, Harriden argues that nonetheless these materials “influenced the cultural construction of gender roles which had important implications for women’s ability to exercise social power in the more recent past” (p. 51). Since Harriden does not attempt to give a complete account of female power in the classical and pre-modern eras, but rather focuses on a few important themes, it might have been preferable to integrate this material into the first chapter. Harriden emphasizes that the exercise of female power in Burma, as far as can be judged from the available sources, tended to be indirect. Because of the importance of kinship networks in shaping Burmese power structures, women could exert influence while remaining in their prescribed domestic sphere. While women could be valued for exerting their influence in a subordinate role, women who were more overtly dominant were viewed with suspicion and distrust—the “evil, scheming queen” became a reviled archetype (p. 74). Chapter three focuses on three powerful queens of the Konbaung dynasty who exemplified this archetype: Me Nu, Setkya Dewi, and Supayalat, the last queen of Burma. Each of these women was popularly depicted as an “evil queen,” and accused of exercising power in a manner that was both fundamentally illegitimate and destructive to Burma.

British colonial rule, described in chapter four, changed the status of women in Burma. The British had mixed feelings about Burmese women’s economic independence and freedom of movement in the public sphere, and while not a deliberate policy, the effect of British colonial rule was to diminish Burmese women’s economic power, as Chinese and Indian migrants competed for the positions that had traditionally been occupied by Burmese women. Whereas traditionally women had sometimes been able to exert political influence indirectly through marriage and family connections, this route to power was diminished as Burmese men were pushed out of positions of administrative authority. By the late nineteenth century, the colonial authorities discouraged marriages between Burmese women and European men, and Burmese nationalists would come to criticize women who engaged in relationships with “foreigners” for diluting Burmese culture and national identity. Women actively participated in the Burmese nationalist movement, but they tended to be confined to subsidiary roles, and subject to male authority.

Although the independent government of Burma was in theory committed to gender equality, in practice women’s opportunities for access to political power did not increase with independence. Chapter five’s title, “Social Workers, Beauty Queens and Insurgents,” sums up the limited options available to Burmese women after independence. Women were limited in the professions that they could access—and almost universally confined to subordinate roles in every context. While women participated in leftist and ethnic minority movements, and at times even assumed leadership roles, they were usually expected to remain subordinate to male authority.

The imposition of military rule, described in chapter six, was disastrous for women’s advancement in Burma. The various military dictatorships that ruled Burma from 1962 onwards not only decreased women’s access to economic and political power, but also targeted ethic minority women in violent repressive campaigns. The military, of course, was an almost entirely male institution, and it came to control almost every aspect of life in Burma. As the economy, conditions of life, and public sphere in Burma suffered from military rule, so too did Burmese women, though a few elite women, personally connected to the military, were able to continue to exercise influence in the traditional manner.

The final two chapters of the book analyze women’s position in Burma post-1988, with chapter eight addressing women’s “advancement” (the quotation marks belong to Harriden) under the military regime since then, and chapter nine discussing the various women’s organizations formed by Burmese women in exile. While the women’s organizations associated with the military regime were able, by their association with the dictatorship, to obtain a sizeable membership, these organi­zations have accomplished little in the way of substantial betterment of women’s lives in Burma, serving rather to defend the regime against international criticism. The expatriate women’s organi­zations dedicated to reform, many of which integrate non-traditional conceptions of gender equality in their platform, seem to be a more promising vehicle for change. Harriden concludes with an assessment of the possibilities for collaboration and connection between these expatriate organizations and groups within Burma.

This work is a significant contribution to the existing scholarship on Burma, and is innovative in its focus on the nuances of gendered power relations. As noted above, this work is strongest when discussing women’s access to power in Burma from the Konbaung era onwards, but overall Harriden’s research is notably thorough. This study will be of interest to scholars of Southeast Asian history and gender relations, and anyone who seeks a better understanding of contemporary Burmese society.

Contents>> Vol. 2, No. 3 Ghosts of the Past in Southern Thailand: Essays on the History and Historiography of Patani Patrick Jory, […]

Contents>> Vol. 2, No. 3 The Long-term Pattern of Maritime Trade in Java from the Late Eighteenth Century to the Mid-Nineteenth Century […] 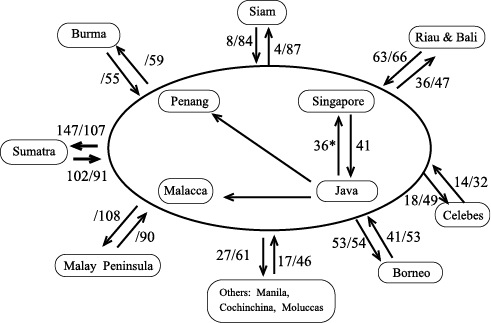