In her remarkable book Asian Place, Filipino Nation, Nicole CuUnjieng Aboitiz restores the balance in the literature on the 1896 revolution that overthrew Spanish colonial rule in the Philippines. Until the last decade, historians—especially those in the Philippines—focused their attention on the indigenous causes of the revolution and the conditions from whence they emerged to explain its eventual success, despite the splits in the leadership of its vanguard, the Kataastaasan, Kagalanggalangang Katipunan ng mga Anak ng Bayan (Supreme and Venerable Association of the Children of the Nation), popularly known as the Katipunan.

These explanations revolved around the transformation of the colonial economy from a mere appendage of a China-Mexico trade into a producer of agricultural commodities for the global market, the change in the class structure which saw the rise of a “Filipino middle class,” and the beginnings of an urbanized Manila. Economic exploitation and political oppression were the principal motivations behind the armed struggle, inspired by the writings of young ilustrados (intellectuals) who introduced European liberalism to the colony.

This was the dominant explanation by the foremost historians of the nation, although by the 1980s a millenarian-nativist turn in the literature gave prominence to how peasants and an emergent urban proletariat were less inspired by European liberalism. Instead, they saw their lives as a contemporary parallel to that of Jesus Christ. The Son of God’s suffering became their suffering, his struggles their revolt. Christ’s ascension to Heaven portended the establishment of an Earthly Heaven once the Spanish were brought down to their knees.

CuUnjieng Aboitiz does not deny these explanations’ validity, but her book is also a subtle, perhaps a bit too respectful, dig at their inadequacies. She notes the “transnational and regional historical setting [that] has barely been incorporated into the localized and Western-oriented historiography of the Philippine Revolution” (p. 2). She acknowledges European liberalism’s footprints in the nation-in-formation. But she also broadens her gaze to argue that 1896 was a pan-Asianist popular movement, the first ever in Asia.

Her book thus focuses on that “moment when things could have gone differently, when thinkers were redrawing their geographies of political affinity and envisioning quite a different potential world order, ordered along lines of Asian solidarity” (p. 12). And by privileging that conjuncture, she reassesses “the Philippine Revolution’s thought and impact, particularly in relation to the landscape of ‘Asia’ then newly reconceived in anti-imperial thought” (p. 7). Asian Place, Filipino Nation thereby

allow[s] us to understand the revolution’s full historical role and place; to illuminate an important transitional moment in Southeast Asian, imperial, and global history in the region; and to reconnect Philippine history to that of Southeast and East Asia at this pivotal moment of the birth of the Philippine nation. (p. 7)

Japan figured prominently in the ilustrados’ and revolucionarios’ plans, inspired as the latter were by Japan’s ability to stand up to the European powers and its seeming willingness to go beyond just the usual declarations of solidarity with the anticolonial struggles of fellow Asians. Filipinos looked forward to their “fellow Pan-Asianists lending material aid toward revolution and harnessing transnational Pan-Asian networks of support, activism, and association toward doing so” (p. 26). But it was not only the Japanese who were seen as potential comrades-in-arms. The Filipinos were also well aware that “certain . . . Southeast Asian intellectuals and activists were moving to enlarge the Pan-Asian map” (p. 71).

The revolution—the first nationalist uprising in the colonial world—was thus more than just European inspired; it also represented the germs of comradely solidarity among Asia’s nationalists. Some of the fruit of these seeds may not be to our liking (Japanese aggression in World War II), but others are worthy of praise (Chinese material support to Southeast Asian liberation movements, including those of Filipino Maoists; the formation of an Indonesian nationalist army soon after the Japanese left; the Bandung Conference; the failed Maphilindo experiment; and, pushing this further into present times, the formation and resilience of ASEAN).

CuUnjieng Aboitiz looks at Philippine history laterally. Hence, instead of the orthodox “vertical” view of Spain vs. the Philippines, or liberalism shot out of European bows and landing on a nation-in-the-making, you have Asian rebels and nationalists exchanging notes on how best to oust the hated imperialists. Instead of a “top-down” portrait of the revolution, with ilustrados and local elites leading the masses, or vice versa, patronizingly depicting the masses as inspired by the Pasyon to justify their actions and pressure their elites to remain loyal to the revolution, you have an incipient pan-Asian solidarity. And at the center of this invigorating flow of experiences and ideas was the Philippine Revolution, “the first case of successful transnationalization of Pan-Asianism, involving cross-border political practice and revolutionary networking” (p. 26).

This is a very refreshing look at Philippine history, and one which belongs on the same shelf as the new scholarship on Mindanao—notably, Oliver Charbonneau’s Civilizational Imperatives: Americans, Moros, and the Colonial World (2020), Patricia Dacudao’s “Abaca: The Socio-economic and Cultural Transformation of Frontier Davao, 1898–1941” (2018)—and on the place of the Philippines in the dynamic movement of people and ideas across Asia (the best compendium on this phenomenon is Traveling Nation-Makers: Transnational Flows and Movements in the Making of Modern Southeast Asia [2011], edited by Caroline S. Hau and Kasian Tejapira).

CuUnjieng Aboitiz draws inspiration from Benedict Anderson’s Under Three Flags: Anarchism and the Anti-colonial Imagination (2007), Resil Mojares’s Brains of the Nation: Pedro Paterno, T.H. Pardo de Tavera, Isabelo de los Reyes and the Production of Modern Knowledge (2008), and Rebecca Karl’s Staging the World: Chinese Nationalism at the Turn of the Twentieth Century (2002). These scholars are known and admired for their intellectual iconoclasm. Anderson’s “detective story” tries to find the links between Filipino nationalism and global anarchism, an interesting attempt to put a more international spin to homogenous, empty time. Mojares sees goodness and intellectual acuity in the much-despised compromisers T. H. Pardo de Tavera and Pedro Paterno. The Visayan Mojares places fellow probinsyano and Ilocano Isabelo de los Reyes on the same level as—perhaps even higher than—the usual cohort of nationalists led by the Manileños and the Tagalog-speaking Jose Rizal and Marcelo del Pilar. Finally, Karl’s conversations with exiled Filipino Maoists while doing her field research in China eventually led to a book that shows how Chinese nationalists were inspired more by the Philippine Revolution than Europe’s political turmoil.

Asian Place, Filipino Nation is, among other things, CuUnjieng Aboitiz’s way of moving the chess pieces further forward. This book is an excellent addition to an increasing number of regionally grounded works on the contemporary Philippines, which is the hallmark of CuUnjieng Aboitiz’s generation of Philippinists. 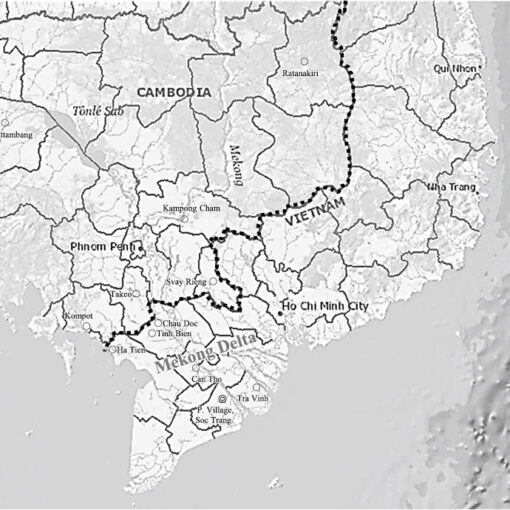 Contents>> Vol. 10, No. 1 Local Politics in the Migration between Vietnam and Cambodia: Mobility in a Multiethnic Society in the Mekong […]